A full-fledged two-weeks' tour will let you visit the main places of interest in Kamchatka you may have already heard about.

The route gives a possibility:

You may also choose some optional excursions:

Great fissure volcanic eruptions (when the volume of lava, ashes and scoria exeeds1 km3) – is a rare natural event. They occur when magma flows up through cracks in the ground. Fissure eruptions are characterized by a curtain of fire, and by lava spewing out to a small height above the ground. Fissure eruptions can produce very heavy flows, though the lava is generally slow moving. In the historical period such great fissure eruptions were registered only seven times: twice in Iceland in 930 and 1783; twice in Mexico in 1759 and 1943; once on Canary Islands in 1730. The sixth and the seventh eruptions occures in Kamchatka in 1975 – 1976 and 2012 – 2013 in Tolbachik Dale.

The Great Tolbachik Fissure Eruption (GTFE) bagan in July 1975 and continued till December 1976 and was the most voluminous eruption of basaltic lava and tephra since the 1783-84 Iceland eruption. About 2 cubic kilometers of material (more than four times the volume of the largest historic eruption of Mauna Loa) were erupted from two major vent areas in the Tolbachik regional zone of cinder cones, a fissure system extending more than 38 kilometers south-southwest of Ploskiy Tolbachik volcano. It resulted in the appearance of the so called Nothern and Southern breakthroughs. Activity at the Northern breakthrough was unusually violent for a basaltic eruption, generating a tephra-laden column 8 to 13 kilometers high that persisted throughout the development of three large cinder cones 330 m., 300 m. and 150 m. high as well as voluminous flows. In 17 months the landscape of Tolbachik Dale changed drastically: the vegetation was destroyed, rivers and lakes were covered by ash. It converted an area of about 400 km2 into a lifeless desert. 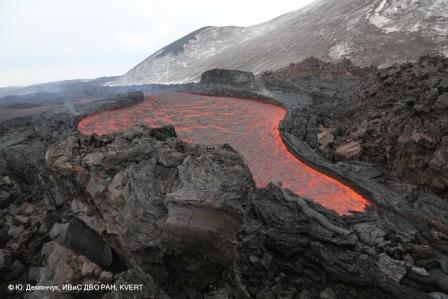 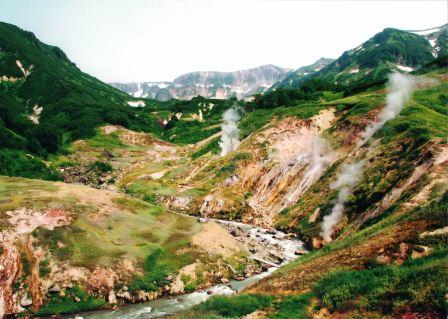 The Valley of Geisers – is one of the largest geyser areas in the world and the only one in Eurasia. It is situated in the heart of the Kronotskiy Preserve. Geysers are definitely nature miracles, because there are only four large fields sheltering dozens of natural fountains, staggering by their striking beauty and unique periodicity of work! Not far from the Valley there’s the caldera of the ancient Uzon volcano, that attracts tourists from all over the world. The caldera of the Uzon volcano is a volcanic depression, which was formed in the result of the volcano top collapse.

If this tour is too long for you or you'd like to organize your accommodation yourself, we offer you to look through the shorter variant of the program. We also recommend you to take a look at a prolonged - fifteen days' tour. 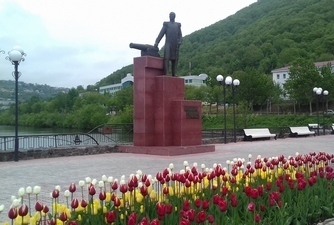 The city, founded by Danish navigator Vitus Bering in 1740, has always been a strategic port in the Far East of Russia. Many round-the-world expeditions of the XVIII – XIX centuries visited Petropavlovsk-Kamchatsky with the refreshment purposes. During the 1854–1855 Crimean War the city was put under siege by the Anglo-French forces but never fell.

On return to the hotel you meet with the guide to discuss the program in detail.
Dinner at the hotel. Overnight stay at the hotel. 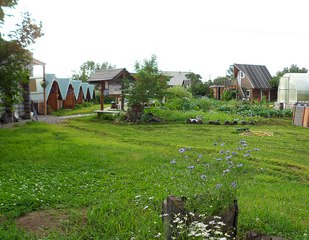 Breakfast. Transfer by all-terrain bus to Kozyrevsk village, on the bank of the river Kamchatka. Lunch en route in the old Cossaсk settlement Milkovo. Arrival at the village of Kozyrevsk. Accommodation at a private hotel, in wooden houses on a specially prepared ground.

Kozyrevsk is one of the oldest settlements of the Kamchatka region. It was founded in the 18-th century on the site of an ancient village of Itelmen – the indigenous inhabitants of the peninsula. It is situated in the valley of the river Kamchatka, 492 km to the north of Petropavlovsk-Kamchatsky. It is also only 37 – 48 km away to the west of the active volcanoes: Ushkovsky (3943 m), Besymyanny (2882 m) and the highest active volcano of Europe and Asia – Klyuchevskaya Sopka (4850 m). A big Neolithic site – the remains of earth-houses, about 800 years of age, was discovered by archeologists in immediate proximity to Kozyrevsk.

Dinner. Instructions for the next day. Overnight stay in wooden huts on a specially prepared ground. 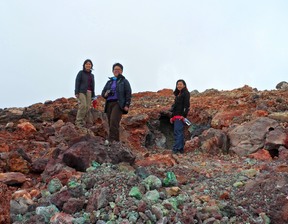 Breakfast. We drive to Tolbachik dale to the height of about 1200 m asl. Excursion to the slag cones of the Northern explosion that appeared during the Great Tolbachik Fissure Eruption in 1975 – 1976. Climbing a new volcanic cone.

The new cones look like mini-volcanoes up to 200 meters high.

Lunch. Excursion to the "Dead Forest" and exploration of the old lava caves in the crater of the cone Zvezda (The Star). Transfer to the site of the base camp.
Assembling the tents. Dinner. Instructions for the next day.
Overnight in tents in the camp.

As a result of The Great Tolbachik Fissure Eruption the bottom of the crater was destroyed and a 500 meters deep caldera was formed. It is now 1,7 km wide.

Observe the crater and the surrounding landscape.

Return to the base camp. Dinner. Instructions for the next day.

Overnight stay in tents in the base camp. 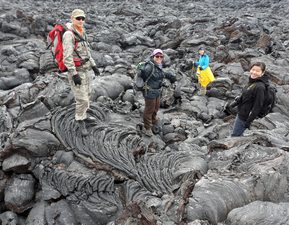 Breakfast. Walking excursion to Menyailov’s crater and the eruptive fissure – the central spot of the eruption of 2012 – 2013 (which was given the name of 50-th anniversary of the Institute of volcanology and seismology FED RAS). Exploration of the site: large fresh lava flows, caves (lava tubes), stone sculptures and piles upon piles of the frozen lava.

When studying the aftereffects of the eruption of the year 2013 the scientists discovered diamonds, that were formed as a result of the synthesis of carbonic gasses. 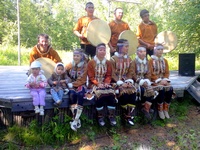 Breakfast. Packing up the camp. Transfer to the village of Esso.

The way from the camp to Esso is 160 km long in a cross country which will take us about 5 hours.

On the way to Esso we take a break in a small ethnographical village of Evens – Kamchatka indigenous people. They will tell you about their way of living and customs. Lunch in the national village.

Check-in at the hotel with a thermal swimming pool. Dinner.

Overnight stay at the hotel. 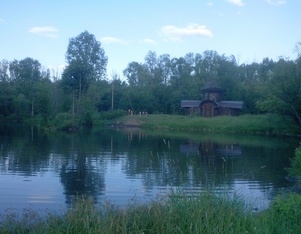 Lunch en route in the settlement of Milkovo.

Check-in at the hotel. Dinner.

Overnight stay at the hotel. 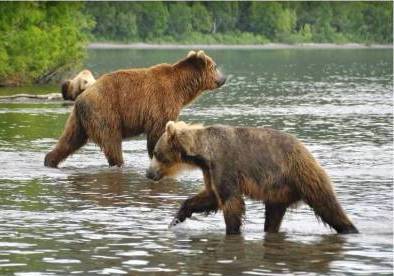 Breakfast. Transfer to the helipad.
Helicopter flight to Kuril Lake. Flight time about 1 hour.
Arrival at the lake. Trekking excursion on the lake. Bears and salmon spawning viewing. Trek to fish-counting weir.
Lunch: salmon with rise, tea/сoffee, juice. Duration of the excursion is 1 hour 30 minutes.

Flight (15 minutes) to the next stop - the caldera of Ksudach volcano.
Trekking excursion in the caldera. Hot Beach viewing. Duration of the excursion is 15 - 20 minutes.

Caldera of Ksudach volcano is the Monument of Nature due to its geological construction. The eruption resulting in the volcano collapse took place in 1907 so that its volcanic ash is still recognized 200 km away from the epicenter of eruption.

Flight to the next stop - about 20 minutes. Landing at the foot of Khodutka volcano. Bathing in the unique hot river, where temperature of water reaches 40°С.

The springs are believed to have a healing effect as they contain a great amount of silicic acid.

Flight back to town. Flight time is about 40 minutes.
Transfer to the hotel. Dinner. Overnight stay at the hotel.

If you’d like to abstain from the helicopter excursion you spend this day on your wish. An optional program may be organized for additional fee. 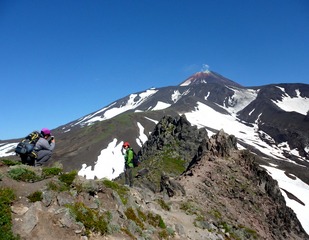 Breakfast. Transfer by all-terrain bus to the foot of Avachinsky volcano to the altitude of 860 m asl.

Part of the route is through the bed of a dry river. The drive to the distance of 30 km takes 2 – 2,5 hours depending on the road conditions.

Accommodation in huts for 4 – 10 persons in the base camp or in double tents in a tent camp. Walking excursion to the mountain Camel (1200 m asl.) will take us 3 – 4 hours. Lunch en route.

The natural monument – "Mountain Verblyud" (Camel) located on the mountain pass between the volcanoes Avachinsky and Koryaksky – is a small rocky massif with two sharp peaks. The mountain was formed during the eruptions of both volcanoes. As a result of earth crust movement and activity of the volcanoes incandescent lava flowed that later became the mount Verblyud.

Return to the camp. Dinner. Toolbox talk for the next day. Overnight stay in the base camp. 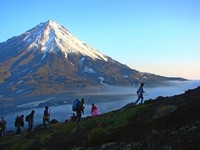 We get to the summit along the western slope by the ascending path with the level of difficulty 1A. The ascent to Avachinsky volcano and return to the base camp take as a rule 9 - 12 hours depending of the participants’ physical fitness. The difference of the altitude is almost 1900 m. The most difficult part of the ascent is the last 100 m.

If you feel en route that you are not ready to continue the ascent, our guide’s assistant will take you back to the camp where you may wait for the rest of the group to return.

Lunch on the volcano slope at the altitude of about 2000 m. Climb the young volcanic cinder cone to the crater. Walk around the crater.

From the edge of the crater you will catch the beautiful view of Nalychevo valley, the southern volcanic group and the Pacific coast. Here you may approach the fumaroles and touch the lava cork that sealed up the crater in 1991. 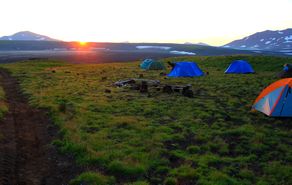 Breakfast. Transfer by all-terrain bus to the foot of Vilyuchinsky volcano. The route goes south gaining height along the valley of the river Paratunka.

As we go up the road we stop to make photos and video at the height of 1100 m at Vilyuchinsky pass. There you will get a formidable view of the valley of the river Paratunka and the volcanoes Gorely and Mutnovsky. Then we go south along a volcanic plateau.

Arrival at the destination. Assembling the tents and setting up camp at the stream Spokoyny.
Dinner. Toolbox talk for the next day. Overnight in tents in the camp. 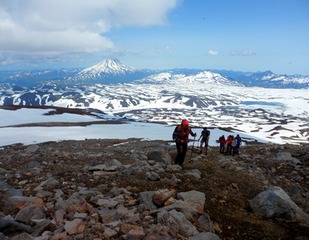 Breakfast. Transfer to the caldera of Gorely volcano. If it is possible we drive directly to the volcano slope, in case it is not possible due to the snow conditions, we cross the caldera on foot.

If you feel en route that you are not ready to continue the ascent, our guide’s assistant will take you back to the camp where you may wait for the rest of the group to return.

Lunch at the top of the volcano. Walk around the craters.

Descent back to the camp. Dinner. Toolbox talk for the next day. Overnight in tents in the camp. 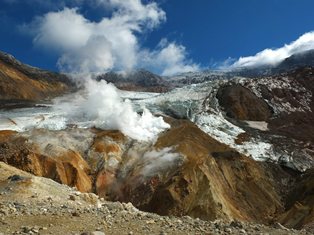 Breakfast. Packing up the camp. Transfer by all-terrain bus to the foot of the volcano Mutnovsky. Safety measures instructions. Hiking inside the active crater of the volcano.

The biggest of the craters of the volcano is located at the altitude of 1600 m, it is considered to be one of the most impressive crates in Kamchatka.

Observe the fumarole zone and of the falling glacier. Lunch inside the crater. Return to the automobile.

Arrival at the bus. Drive to the canyon Opasny, where you can take pictures of an 80-meters waterfall. Drive back to the town. Accommodation at the hotel. Dinner. Overnight stay at the hotel. 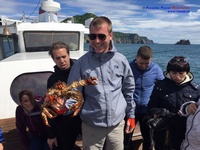 Breakfast at the hotel.

This day you may take part in optional excursions (discussed and payed in advance):

- helicopter excursion to the Valley of Geysers;

Dinner. Overnight stay at the hotel.

Breakfast. Visit to the local fish market and a gift shop. Transfer to the airport.

* NOT included in the price are:

* The price of the tour may vary depending on your wishes and the type of accommodation!